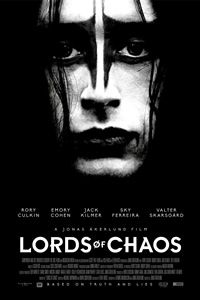 The trouble with creating a film about events that really happened is that true life is messy and doesn’t fit into the neat structures of a narrative. Films like Goodfellas and Zodiac document real stories, but events and even characters are combined, shifted, altered, or omitted to make the movie more effective. Structure and flow are important, even in documentaries. This does create an element of falseness to a film based on true events, which Lords of Chaos is to some degree; however, leeway can be given with the right disclaimer. In the case of Lords of Chaos, the opening statement is perfect: This is based on truth, lies, and what really happened.

Lords of Chaos tells the bizarre story of a Norwegian black metal band, a suicide, a record shop, a series of church burnings, and two murders. In doing so, it plays with the truth and makes narrative changes, yet the main points are mostly accurate. It is an odd and twisting tale, but an intriguing one, and as a rarity in film about musicians the musical performances do not appear stilted or incorrect, but very much ring true. Photos and videos are recreated, giving context, and the main players are presented as fallible humans rather than legends or monsters.

Rory Culkin stars as Øystein Aarseth, a guitarist who went by the name Euronymous and was one of the founders of Mayhem. The film predominantly follows his journey from the early days of the band rehearsing in his parents’ house, through some success within the black metal scene in Norway and beyond, to a pivotal moment which caused the band to never be the same again. Along the way key characters are introduced, two of which were real and one created for the film. The first, who really existed, is Pelle Ohlin, known by his stage name Dead, who is played by Jack Kilmer. Mayhem’s vocalist until his suicide, Dead was a troubled and damaged individual who Ohlin plays brilliantly and with just enough innocence and wonder to juxtapose his depression, self-isolation, and fascination with death. The second, who again is a real person, is Kristian Vikernes, who later renames himself as Varg Vikernes, and who then goes by the moniker Count Grishnackh. He is inferred to be a poseur, invading the black metal scene for his own benefit and never truly fitting in, though how true that is remains questionable. He later becomes Mayhem’s bassist, as well as putting out solo releases. He is played with an interesting self-inconsistency that is entirely consistent by Emory Cohen. The third notable character, who is an amalgamation of several women involved with the band and Euronymous, is Ann-Marit, who is given a lot less to do in the film than the male characters, though Sky Ferreira skilfully brings a role out of a few lines that has significant impact on the tale being told. Other characters include the various other Mayhem band members, other black metal musicians, groupies, and general hangers-on that were part of the early-90s black metal scene in Norway.

The film is directed by Jonas Åkerlund, who, though perhaps best known for directing music videos, was the first drummer of Swedish black metal band Bathory, and also has several feature films under his belt. Here he is at his most confident, and though this is not a perfect film, it is strong in its delivery. It is a graphic film, with extreme violence and self-harm shown without warning or caveat, but everything is justified in its inclusion. The writing is good, the performances are nuanced, and the storyline is absorbing. Whether truth, lies, or what really happened, Lords of Chaos is well worth a watch.