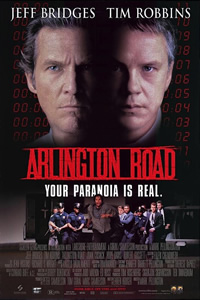 Back in 1999, terrorism in the United States was often carried out by domestic agents. The likes of Ted Kaczynski and the Branch Davidians were at the forefront of the public consciousness, and so a film like Arlington Road about a domestic terror plot was a sure-fire hit. A mere two years later saw the worldwide impact of the events of 9/11, and the face of terrorism changed for over a decade.

The terrorist as an enemy is one well-explored in film, yet more often than not that terrorist is ‘the other’ and therefore separate from society as a whole. Domestic terrorists were loners and outsiders who did not, could not, or would not fit into the expected norm. They were obvious in their separation, so after the fact onlookers could comment that there was always something wrong and they knew something like this would happen. Then, with 9/11, the terrorist was no longer an outsider living inside the country, but an external agent from and entirely different environment. Attention turned to Muslim fundamentalists, and for white America the terrorists were from another country, another culture, another religion, and another race. They were never within.

In the last few years terrorism has changed again, and once again the domestic terrorist has become the enemy. Now the old tropes of the gun-toting redneck that lives in the woods with a bunker under their house have returned, but also something scarier. Politicians and public figures feel free to make statements excusing the actions of white supremacists, or even show outright support for them, and regular people are becoming radicalised to the point where they storm government buildings en masse in acts of insurrection. The terrorist as ‘the other’ has been pushed aside. Instead, the West as a whole—including, but not limited to the US—is facing the realisation that the terrorist could be our neighbour, our friend, or our family. They are no longer an outsider, but one of us, and that is the horrifying truth that Arlington Road taps into.

The film concerns itself with a university professor who teaches American History with a focus on terrorism. He is played with stunning empathy by Jeff Bridges. Having lost his wife, an FBI agent who died in the field during a terrorism incident, he is now raising his son and teaching whilst still struggling with long-term grief. One day he finds a boy, around his son’s age, walking down the street with awful burns to his hands, so he rushes him to hospital. Upon discovering the boy lives across the street and realising he does not know his neighbours, he strikes up a friendship with the boy’s parents, played by Tim Robbins and Joan Cusack. He then begins to question their explanation that their son was playing with firecrackers, instead wondering if he had got hold of some explosives that his parents were planning on using for an attack. Paranoia sets in and Bridges spirals into freefall as he investigates whether his neighbours—these polite, friendly people he has got to know—could be capable of carrying out an act of violence so horrific it would kill and maim indiscriminately.

This is a film about guilt, but not in the way one would expect. The guilt is almost entirely owned by Bridges’ character: guilt that his wife died, guilt that his son is without a mother, guilt that he has found a new relationship with a former teaching assistant, guilt that he has brought a new matriarchal figure into the family home, guilt that he does not know his neighbours, guilt that he might be wrong about his suspicions, guilt that he might not be able to stop unnecessary deaths. It is a complex and incredible performance, and Bridges—who is a fine actor—plays the part as if it were his last ever role. The man he presents has something dark and worming crawling under his skin and no matter how much he scratches it just burrows deeper and itches more.

In contrast to Bridges’ emotive performance, Robbins is cool and reserved. The control he exerts, and the normality he presents, is consistently unsettling, but nowhere near as much as Cusack’s cheery housewife. She is chillingly genuine and her grin has never been as worrying as it is here. Watching these three dance in this film is to observe a masterclass in performance.

Arlington Road presents a concept which is so upsetting it can lead you to refuse it, but that is the brilliance of the film. We are so used to seeing characters that will do anything to achieve their goals, and so we root for them as they break laws and leave a trail of destruction in their wake. Here we stand on the other side, with the law-abiding, watching those same characters but without the ability to do anything about it.

If bigotry, racism, and Nazism are no longer taboo, and carrying out acts of terror can be described as patriotism by officials in high office, then the real horror of the 21st Century is not that outsiders might attack us, but that there is already a war raging within. Arlington Road peels back the skin of society and shows the rotten core that was always there. As a film, it holds up in the modern climate so well it almost should have been released now as it was considerably before its time, yet also very much of it. With the current resurgence in attention to pre-9/11 domestic terror, such as high profile TV series fronted by movie tent-pole actors covering the UNABOMBER and the Waco siege, Arlington Road is well worth a viewing. For an edge-of-your-seat suburban thriller to hold a mirror to society so effectively and to tap into deep-seated fears as it does is incredible. Arlington Road puts a human face to an inhuman act. It is not a film with a warm heart, but a cold core that chills and leaves a scar.

This website uses cookies to improve your experience while you navigate through the website. Out of these, the cookies that are categorized as necessary are stored on your browser as they are essential for the working of basic functionalities of the website. We also use third-party cookies that help us analyze and understand how you use this website. These cookies will be stored in your browser only with your consent. You also have the option to opt-out of these cookies. But opting out of some of these cookies may affect your browsing experience.
Necessary Always Enabled

Any cookies that may not be particularly necessary for the website to function and is used specifically to collect user personal data via analytics, ads, other embedded contents are termed as non-necessary cookies. It is mandatory to procure user consent prior to running these cookies on your website.