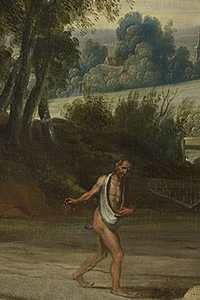 A week after Nutting Day signalled the ripening of the nuts is Devil’s Nutting Day. The tradition holds that on this day, the Devil comes to take his share, so no nuts should be gathered. It was a day of focusing on consolidation rather than gathering, as folk tales of meeting the Devil prevented many from even leaving their homes on Devil’s Nutting Day.

The celebrating of Nutting Day was a popular pastime but also had functional value, as nuts could keep and so were a good food source for the Winter. Having a day of interruption meant that natural nut gathers, such as squirrels, would be able to forage enough to store up for hibernation.

Angels in broad-brimmed hats and russet cloaks,
The colour of the Devil’s nutting-bag. They came
Into the Meeting-house this afternoon
More in the shape of devils than of angels.

Custom has it that the hill in Warwickshire known as the Devil’s Nightcap was formed when the Devil, out gathering nuts one year on 21 September, ran into the Virgin Mary and dropped his nutting-bag in surprise. That became the hill.

Devil’s Nutting Day is not particularly acknowledged any longer, though some use it as an opportunity to bake a cake made with the nuts gathered the previous week on Nutting Day.